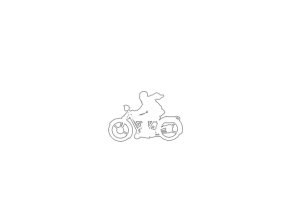 Riding a motorcycle in Nepal had been a dream ever since I had the chance to ride in India.
In India, every kilometer you venture north of Delhi seems to get more desolate, hospitable, welcoming, and magical. I had always imagined both Tibet and Nepal as the epitomy of that zenfulness as you head north.
It’s true and it’s not. 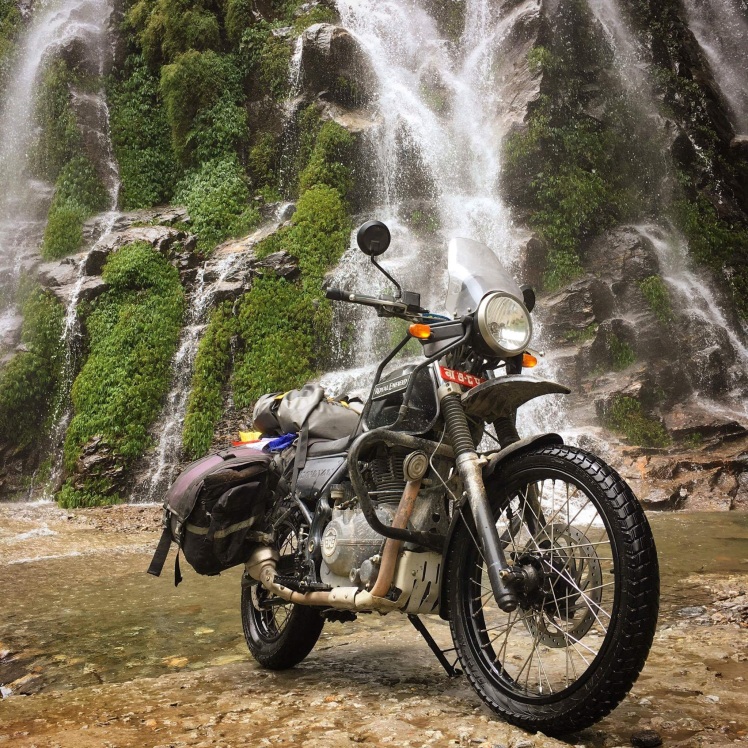 Exiting Kathmandu is the most insane / thrilling / suicidal motorcycle riding experience one can have.  Take Bogotá’s rush hour traffic and multiply times 100 — ride on the left lane, say goodbye to any road sign, pavement turns into singletrack enduro at any point.  Colorful diesel trucks come straight at you on your lane knowing that you will get out of their way and if you slow down you’ll be swarmed by other motorcyclists, buses, trucks and richshaws. The best strategy is to turn on enduro mode and be as fast as everyone else to hop in the flow.  You can’t try to set your own pace. Not an option.
Breathing mask is a must (thanks Rafa) – since the first 30 kilometers are a thick fog of soot mixed with heavy dust from the pavement that is only 50% paved.  Even bus and truck drivers drive with their windows down and a bandana over their face held up by wide reflective goggles. 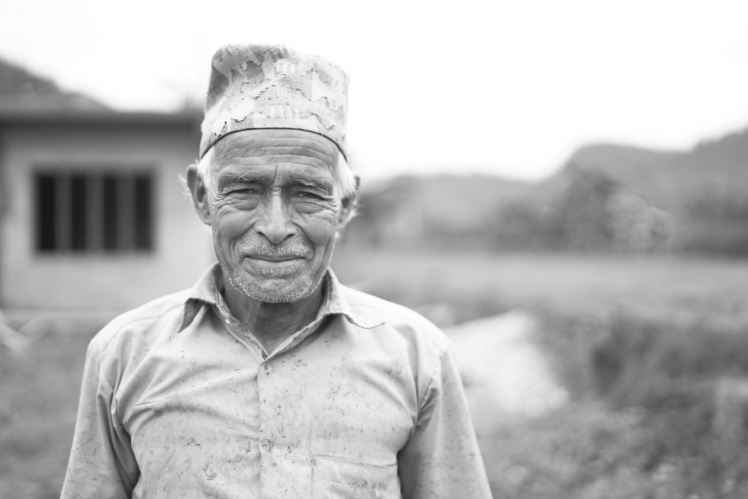 If you squint your eyes for a second and imagine the colorful trucks as art cars, you’d think you’re at a Nepalese burning man that’s been happening for ages.  However, instead of an open desert, you have a concrete jungle of half-built shanty towns, hectic commerce and a small Buddhist or Hindu temple on every block.
The final destination for this trip is Manang. The end of the road for vehicles on the Annapurna trail and the beginning of the trail to Tilicho Tal – the highest lake in the world.
As soon as I make the first turn from Nepal’s primary east-west highway, the truck density is reduced, the view opens up, the air is cleaner, and you begin to notice the details around you. You’ve crossed to the other side of the industrialized soot curtain and have time-traveled about 300 years. 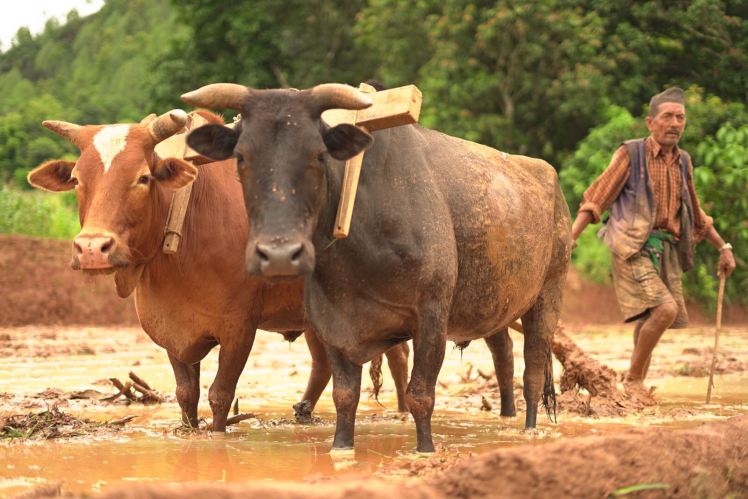 Rice patty fields are worked by men, women and ox. The terraces of rice fields flow along the Trishuli river.  The highest piece of technology seen on the field is the ox used to till the soil. Women carry the harvest on baskets strapped to their head and will often carry a load that is 2 to 3 times their size.
Despite the Annapurna circuit attracting so many tourists from around the world, the Nepalese outside of Katmandu are genuinely thrilled to see you and they immediate ask: “where you come from?”
I want to answer: I come from the year 2017. 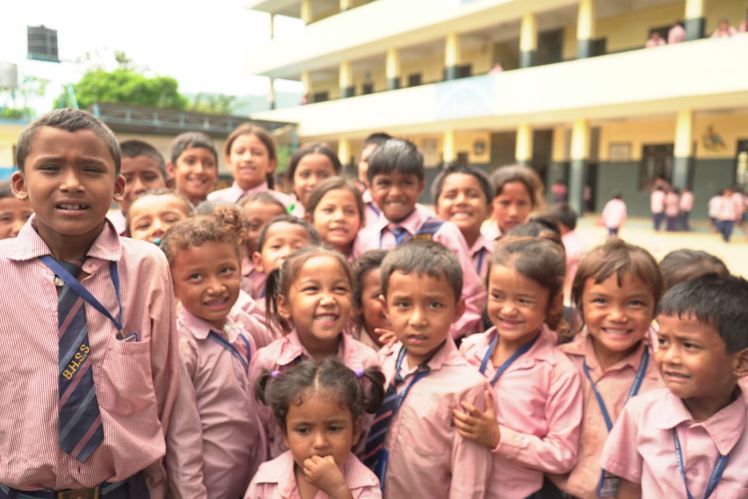 The first stop on the trip is Bagishwori Elementary School in  Maleykhu – a village of about 200 people.  Gham Power (rural solar power company I’m volunteering for producing a video) is installing solar panels today and I have the opportunity to film some of the installation.
The school is more developed than what you would imagine a rural school in a Nepalese town of 200 people.  It has three floors, classrooms for 6 grades, a medical facility a computer room (with one computer, wifi and a projector), and Gham’s solar panels to solve for a very unreliable grid.  A lot of the progress was thanks to a generous donation from a German couple who connected with the school during their Nepalese trekking adventures.  They print the photos of the couple in the principal’s office and thank them in every other sentence the principal or teachers speak.  They show me pictures of the school before the donation and it’s night and day. I want to do this one day for one school. Students come here from far outside Maleykhu.
I arrive at 11am and immediately distract every classroom. The kids seem ecstatic to receive a foreigner and they wave through their classroom windows. After doing the video shoot of the installation, the English teacher offers a tour and asks if I’d like to spend time with a classroom. Yes, please.
We walk into the computer lab where the teacher is entertaining students by letting them pick dance music videos on YouTube. My guide, the English teacher, requests some Nepalese dance videos and asks for volunteers to show the guest their traditional dance. The kids were not shy. They stood up with pride and showed their best moves in what seemed to turn into a talent show.  After the traditional dancing came break dancing, hip-hop, and some moves that would not be allowed at an american 5th grade class.
Then they turn to me and say: “your turn”.

Shit. I need to perform now. The only song that comes to mind: Archit’s wedding song – Kala Chashma (we had just learned the moves for the Sangeet).  The teacher fires up the tune and I proceed to give them the best dance performance I have in me. The crowd goes wild.  They think I’m the funniest clown they’ve seen and I’m surrounded by 30 kids in complete laughter. Strong start to this trip. 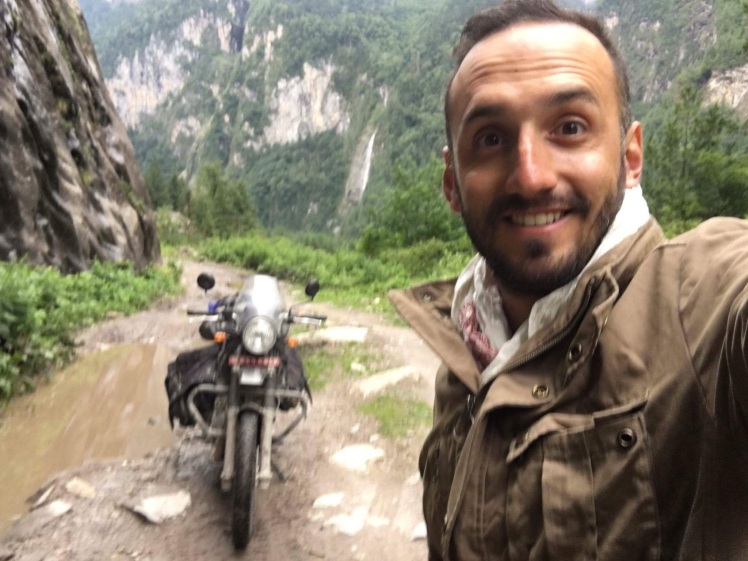 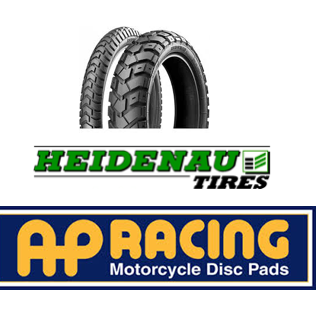